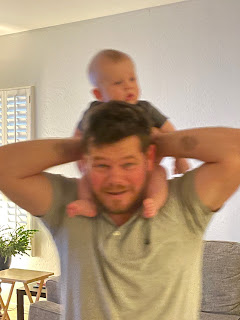 We’re in Phoenix right now, the boat is still in the water in Deltaville VA.  Eric has been busy working on the stabilizers.  We think it’s finally right and working correctly.  Eric is also installing some new electronics which we are very excited about, however in getting the old gear out for the new gear to go into, Eric found that the bow and stern thruster controls don’t work up on the flybridge.  He has begun chasing that issue.  There is an inverter that was wired incorrectly, it worked but it just wasn’t wired in the manner the manufacturer suggested, another Eric job.  Painkiller is being hauled out of the water, which is amazing to watch and scary as can be (you hope the straps don’t break!) to put potentially 2 new transponders on the hull.  The exciting change we are making is getting the font for the boat name changed.  It should be more readable after it is done.  We brought the teak grates and seats for the showers with us to strip off the peeling varnish and redo them,
Post a Comment
Read more 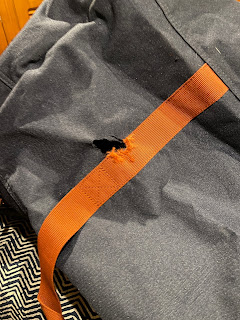 Travel days can be fun when you get to stop at new and interesting places.  We got to Gatlinburg TN and it was so jam packed with cars, and you know why?  There’s a lot of fun things to do ie. zip lining, river speed boats, tons of shopping, including the outlet stores.  David went to a tool store, he said they had everything so he added to his tool collection.  I went to the Lodge cast iron store and found a few things I couldn’t live without.  We also had to make a stop at the fireworks store for a few explosives for New Years.  There was one more fun stop, the Russell Stover candy store.  We found the back room where the “Bloopers” were, the seconds.  Buy 2 bags, get 1 free, that made 12#’s of sugar free candy, we’ll be pooping like a goose with all that sorbitol! The day before we left Deltaville, we had a scary thing happen.  We took the Painkiller name decal off the boat to have a new one made in a more readable font.  David  spent 4-5 hours getting the glue off, compounding and
Post a Comment
Read more 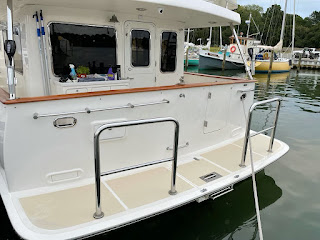 Sorry I missed last night’s blog post.  I was so tired, I fell into bed.  It’s the first time I have missed in about 10 months of blogging since starting back in February-ish, I think.  We have been cleaning, fixing, packing and sorting through so much stuff trying to decide what needs to go to Phoenix.  Some stuff needs to stay in Phoenix and other stuff I would just like to have there for our extended stay off the boat.  We will be spending the holidays with the kids in Phoenix and back on the boat in January, or at least that is the plan as of today.  I removed our name “Painkiller” off the boat, we are having the same name put back on but in a different font.  The rigging guy was here today to measure for new lines that hold the mast up.  AND best of all, Eric came down and spent an hour with us going over the items that need to be done while we are gone.  The freezer in the commissary died, again, there’s an inverter that needs be rewired so it is to code, the rub rail where we h
Post a Comment
Read more

October 04, 2021
Some people can be just plain ol' unpleasant.  We were getting ready to move the boat off the fuel dock to our assigned spot...except some sailboat guy poached our slip.  This lady was hanging around the fuel dock, pacing actually. David said something to her and she explained to him in no uncertain terms how she was waiting for her boat to be put back into the water so she could put it in her assigned slip.  Only her assigned slip was where we had gotten bumped to and she let us know.  David explained how we got bumped out of our assigned slip too.....and so goes life in the marina.  We super cleaned the dinghy this morning, last time we worked it over, we just got the mildew farm off.  But after today, it looks new.  We made our own temporary repair on the dinghy cover.  There is one spot that has failed a couple of times, one repair  put a layer of canvas down with glue, whoever repaired it the next time used duck tape, the next repair used bathtub caulking, geez what a mess!
Post a Comment
Read more 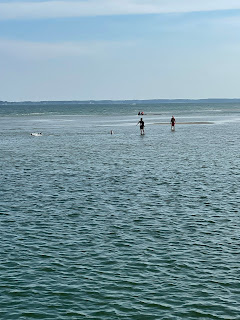 Aside from the pretty bumpy ride today, there was not much excitement, but I'll take it!  We left the Solomons at 8am and for some reason, we had no GPS, fixed that, then no auto pilot, fixed that, no depth finder, fixed that and then we were on our way.  I think the instruments just had a brain fart as all we had to do is turn them off and back on again, a very easy solution.  The winds were as projected, 16 knots but the swell, a different story.  We estimated about a 4' swell with a 5 second interval (that means the "waves" were 4' high and ever 5 seconds a new one hits you), it was plenty to give us an "E Ticket" ride.  I slept quite a bit but just because I get so sleepy with the motion of the boat.  I did take the helm for a little while so David could watch his football game.  It was sure easy pulling into the marina, we spent so much time here and did so many trial runs that it has become quite familiar.  Tomorrow's job will be to wash the b
Post a Comment
Read more 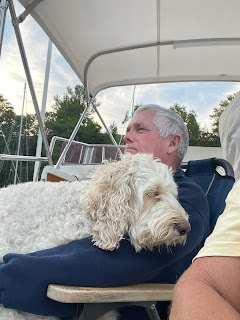 Wow, where do I start??  The day started out with a beautiful sunrise and there it ends.  Captain Pam took the boat off the dock at 7am. I did a good job with the help of David.  It was going great, right up until it hit the fan!!  The throngs of people already on their boats for a day of fishing noticed the name on our boat and wanted to have a conversation,  not a good idea.  As we got near the red buoy, the current, the swift current, caught us and started pushing the boat onto the buoy.  We totally got shoved into it and what a horrible, horrible noise. The rub rail took the brunt of the collision.  We haven't been able to really look closely but we're pretty sure there's no damage other than our egos.  Well, crap, the kraken won today.  This is the first time we have had "a moment" on the boat.  I must say, it was bound to happen sooner than later and I'm kind of glad it's behind us.  The weather was a little snotty for awhile, wind blowing up to 24
Post a Comment
Read more 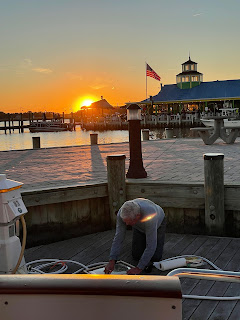 Mr Leon and his crew finished waxing the boat this afternoon.  He did a great job, you can see your reflection in the shininess (is that even a word?), they even shined up the inside of the cabinet doors! We called for an Uber and went to run some errands, David needed weather stripping to seal up the lid on the sump pump.  We're running out of things to try to get rid of that "not fresh" smell downstairs.  I went to CVS and then over to Safeway to stock up on a few things before we leave in the morning.  When we called for an Uber, there were none available for about 20 minutes.  We finally found a cab company that would deliver us back to the marina, $7 to get there and $20 to get back, wow for $40 worth of groceries.  Unfortunately, that's the price you pay to live in Boatland.  We stopped at the fish market for some fresh shrimp for shrimp cocktail for dinner, that's always a good diet dinner.  We leave in the morning for the Solomons and then the next day ba
Post a Comment
Read more
More posts